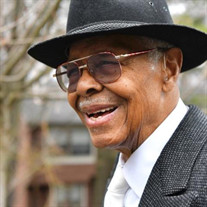 Not sure what to send?

William Warren (Bill) Matthews, 97, of Nanuet passed away peacefully on May 12, 2022, surrounded by his loving family. He was the beloved husband of Florence Matthews for 37 years. Bill was born in Atlanta Georgia on February 27, 1925, and later moved to New Jersey. He attended New York University, where he played football and ran track. After graduating with a master’s degree, he began a successful career as a Special Education teacher and was affectionately known as “Mr. Matt”. He touched the lives of many of his students and, in fact, several of them have kept in touch with him throughout his life. Bill loved to dance and entertain others with his many magic tricks. He was an avid tennis player for most of his life and made lifelong friendships both on and off the court. Bill was a man of great faith and a loyal parishioner at St. Paul’s A. M. E. Zion Church. He was an extremely kind and friendly person, and his greatest pleasure was being around his family and friends. In addition to his wife of 37 years Florence, Bill is survived by his two children, Warren (Victoria) Matthews, and Ann Matthews, his stepchildren Fran (Steve) Morrow, Michael (Jan) Kirsch, and Robyn Bruck. He was the loving Grandfather to Pearse, Jason, Malcham, Ryan, Jessie, Jordan, Alyssa, Emily, Alex and Joey and Great-Grandpa to Kyle, Quinn, Hayden and Luke. He will be deeply missed by all who knew him. Bill was one of the few remaining World War II veterans and will be buried with military honors. The service will be graveside on Monday, May 16th at 11am at the Fredrick Loescher Veteran’s Memorial Cemetery located at 220 Brick Church Road in Spring Valley.

William Warren (Bill) Matthews, 97, of Nanuet passed away peacefully on May 12, 2022, surrounded by his loving family. He was the beloved husband of Florence Matthews for 37 years. Bill was born in Atlanta Georgia on February 27, 1925, and... View Obituary & Service Information

The family of William Warren Matthews created this Life Tributes page to make it easy to share your memories.

Send flowers to the Matthews family.