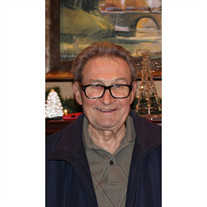 Long time resident of Suffern, NY, Romualdo Cogliano, 84, was called home peacefully to be with the Lord on May 4, 2020, surrounded by his family. He was born on February 7, 1936 in Fontanarosa, Italy to Giovanni and Felicia. Romualdo married the love of his life, Carmela, on February 7, 1963. He immigrated to the United States with his family in 1972. Romualdo was a long time employee of Ciba-Geigy Pharmaceutical Company in Suffern, NY. Romualdo had a tireless work ethic and remained devoted to his family. He had an infectious personality. People enjoyed his company and always gravitated toward him. He spent much of his time volunteering for the Mahwah Elks Club where he was awarded Volunteer of the Year twice. Romualdo was also an active member of multiple senior clubs in which he had a lasting impact on others and the community. Romualdo had a passion for gardening, cooking, and spending time with his family. Making homemade wine, grappa, and tomato sauce were highly anticipated family activities. Romualdo was preceded in death by his wife, Carmela. Romualdo is survived by his three sons, John and his wife Diane, Michael and his wife Regina, and Frank and his wife Jenny. Also surviving are his grandchildren, Carmela, Michael, Meredith, and Kimberly. He is also survived by a large extended family in Italy. In lieu of flowers, please consider donating to the American Heart Association or the National Kidney Foundation in his memory. Due to the COVID-19 restrictions and for the health and safety of others, there will be no visitors. However, please note the funeral home will be webcasting a virtual viewing under Romualdo Cogliano's webpage, Saturday, May 9th between 10:00 and 11:00 AM.

Long time resident of Suffern, NY, Romualdo Cogliano, 84, was called home peacefully to be with the Lord on May 4, 2020, surrounded by his family. He was born on February 7, 1936 in Fontanarosa, Italy to Giovanni and Felicia. Romualdo married... View Obituary & Service Information

The family of Romualdo Cogliano created this Life Tributes page to make it easy to share your memories.

Send flowers to the Cogliano family.