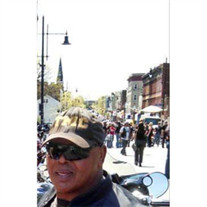 Rolland Frederick Dennison, Jr. of Mahwah, NJ, went home to be with the Lord on Monday, November 11, 2019. He was 69 years old. Rolland was born on July 8, 1950 in Hackensack, NJ to his parents Rolland Frederick, Sr. and Shirley Irene Dennison. A lifelong resident of Mahwah, NJ, Rolland went through the Mahwah school system and graduated from Mahwah High School in 1968. Known to family and friends as Bugs, Bobo or Bugsy, we would be hard pressed to find someone who didn't know and love him. In his High School years he played football and was also the wrestling team's heavy weight wrestler. As a young man, Bugs worked as a Bouncer prior to becoming a Corrections Officer for the Bergen County Sherriff's Department for many years before retiring. Let's not forget those Harleys! Riding with his Thunder Club and other Biker Buddies was his favorite pastime. And then there was his dog Jerszey, the love of his life. And how about those beautiful Ford Trucks; each one a step up from the previous one. Bugs also loved participating in many barbeques at the Dennison home in Mahwah along with his Mom Shirley and his brother Stosh. His quiet gentle spirit won you over....unless you had an occasion to see the Bouncer or Corrections Officer side of him! Bugs is survived by his cousin Donna Benefield from Connecticut on his Mom's side, several cousins on the Dennison side, and a host of friends in the New York and New Jersey area, and the Morgan family who he also considered to be his cousins. He is predeceased by his parents Rolland, Sr. and Shirley Dennison, and his brother and only sibling, Stanley Dennison. Visiting hours will be on Sunday, November 17. 2019 from 2:00 - 4:00 pm, immediately followed by the Funeral Service at Scarr Funeral Home, 160 Orange Avenue, Suffern, NY 10901. Family and friends are invited to join together at the Ramapo Reformed Church, 100 Island Road, Mahwah, NJ for the Repast.

Rolland Frederick Dennison, Jr. of Mahwah, NJ, went home to be with the Lord on Monday, November 11, 2019. He was 69 years old. Rolland was born on July 8, 1950 in Hackensack, NJ to his parents Rolland Frederick, Sr. and Shirley Irene Dennison.... View Obituary & Service Information

The family of Rolland Buggs Dennison created this Life Tributes page to make it easy to share your memories.

Send flowers to the Dennison family.