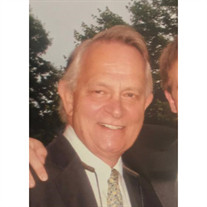 Richard Heil Pinney passed away peacefully on October 31, 2020 in New York. He was born on May 1, 1942 in Salt Lake City, Utah to Nellie Elizabeth and James Granville Pinney. He graduated from East High School and the University of Utah before moving to New York to attend New York University's Graduate School of Business where he earned his MBA with Distinction. In 1967 he accepted a position at The Chase Manhattan Bank in Chase's MBA Special Development Program. He would go on to spend 15 years at Chase in a variety of client executive positions and ultimately as a Vice President and Division Executive in the Institutional Banking Department. Richard left the bank in 1982 and continued his career out West, pursuing an interest in the oil and gas exploration business before returning to New York City to reposition his career in real estate. He was the founding principal of Pinney, Stone & Company LTD, a real estate investment sales and management company which he ran for over 30 years. Richard spent close to a decade raising four children with his first wife in New Jersey before returning to New York where he married his current wife, Donna Morrell, in 1984. While his primary residence was in Manhattan, most weekends and holidays were spent with his wife and family at their home in Tuxedo Park, NY where they hosted many memorable gatherings of their family and friends over the years. He served on the Tuxedo Club's Board of Governors for 8 years, including several as House Chairman, and was a long-time member of The Union Club in NYC. Richard loved spending time with his wife, Donna, of 36 years, their children, and his children from his first marriage. He is survived by his wife and their two kids Ryan Giesen (Jon) and John; his four children Samantha, Morgan (Julie), Justin (Pei), Brooke (Lindsay) with his first wife, Caroline Creer; and his 7 grandchildren Austin Pinney, Bernadette Pinney, Adele Pinney, Alexis Pinney, Sophia Pinney, Jonathan Giesen and Emily Giesen, as well as many nieces, nephews, extended family and dear friends. Richard will always be remembered as a gentleman in his signature blue blazer, khakis and button-down shirt. He was an avid golfer, a voracious reader, a talented cook, and an all-around sports enthusiast. Kind and humble, he cherished his family and friends above all. His time spent in the Forest Service in Utah during his teen years reinforced his love of the outdoors and his focus on conserving our natural resources. In lieu of flowers, the family requests donations in Richard's memory be made to Utah Open Lands. [https://www.utahopenlands.org/richard-pinney] Due to the current health crisis, a private burial will be held in Tuxedo Park, NY.

Richard Heil Pinney passed away peacefully on October 31, 2020 in New York. He was born on May 1, 1942 in Salt Lake City, Utah to Nellie Elizabeth and James Granville Pinney. He graduated from East High School and the University of Utah before... View Obituary & Service Information

The family of Richard Pinney created this Life Tributes page to make it easy to share your memories.

Send flowers to the Pinney family.