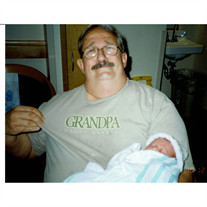 Richard Joseph Dispensa, Sr., 81 years old, of Airmont, NY, passed into the arms of our Lord on the morning of December 22, 2019. He was born on Wednesday May 25, 1938 in Flushing, Queens and raised on 108th street in Corona, NY. He is predeceased by his childhood friend and loving wife Joan of 48 years, his parents Mary & Joseph Dispensa, his older siblings Paul, Rosemary, Victor, and Salvatore. Dad is survived by his four children, Loretta, Richard Jr., Andrew, Peter, and his younger brother Joe. He adored his seven grandchildren Jason, Kayla, Justin, Noelle, Andrew, Julianne, and Jennifer. Dad married Mom on October 21, 1961 at St. Luke's Church in Queens, NY. He was 23 and she was 20. He was proudly enlisted in the U.S. Navy on September 6, 1961 and was honorably discharged on September 5, 1967. His time in the Navy included two years onboard the aircraft carrier U.S.S. Essex (CVS 9) where he served on deck as an air crew member launching planes. He was then promoted to Petty Officer and served in radar operations. Later, he became an HVAC NYC licensed engineer for Rockefeller Center, Inc., working there for 15 years, and then NBC for 21 years. He retired seven months prior to the September 11th attacks on the World Trade Center, where he worked every Tuesday morning on the 110th floor of the North Tower. Dad loved road trips, playing with his grandchildren, hunting, fishing, cooking "old world style", and model trains. He often joked that he was a "Railroad Tycoon... but in miniature". Dad could fix anything, a legacy he taught to each of his four children. He was a loving husband, father, and grandfather. In the ten years after Mom's passing, Dad never stopped loving her and quite often expressed how he missed her every day. Visitation will be from 7pm to 9pm on Friday January 3rd, and from 9am to 10:45am Saturday January 4, 2020, at Scarr Funeral Home, Suffern, NY. Funeral services will immediately follow at 10:45 AM.

Richard Joseph Dispensa, Sr., 81 years old, of Airmont, NY, passed into the arms of our Lord on the morning of December 22, 2019. He was born on Wednesday May 25, 1938 in Flushing, Queens and raised on 108th street in Corona, NY. He is predeceased... View Obituary & Service Information

The family of Richard J Dispensa created this Life Tributes page to make it easy to share your memories.

Send flowers to the Dispensa family.