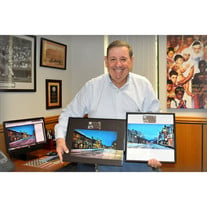 Philip T. Tisi, 72, formerly of Sloatsburg, NY passed away peacefully at his home in Tuxedo, NY on Tuesday, April 7, due to complications stemming from coronavirus. He was born in Dobbs Ferry, NY to the late Carmen and Mary Maiolo Tisi. He earned his undergraduate and masters degrees from Niagara University and an administration degree from SUNY New Paltz. Following his studies, Phil took a job at Suffern High School where he worked for 38 years as a beloved Social Studies teacher. Phil loved his role as an educator so much that he went on to serve his school community as a department chairman, and Summer School Principal. He fostered strong relationships with his students often following their lives and careers long after they left his classroom. In addition to his passion for teaching, Phil also had a passion for and pride in his community. He worked for over twenty years at the Town of Ramapo as Public Information Coordinator, Assistant to the Town Supervisor, Deputy Supervisor, and Interim Supervisor. Among his recent activities were helping the residents of the Hamlet of Ramapo find new housing, working to preserve the Challenger Center (the location for this center was chosen due to the work of one of his Participation in Government students) promoting the preservation of Harmony Hall in Sloatsburg, and the Lafayette Theater in Suffern, where he loved to watch movies in the splendor of the single screen theater. He was also active with local veterans groups in distributing holiday dinners. One of Phil's greatest passions of the past several years was serving as an officiant for many local weddings. He always spoke with love and pride when he saw one of his couples around town remarking, "I married them," with his signature grin. Phil loved spending time with his grandchildren, going to Broadway plays, watching sports, attending NY Boulders games, and could debate endlessly about anything. He is survived by his wife of 48 years Alicia, son Peter (daughter in law Erin, grandsons: Liam & Patrick) of Westwood NJ, daughter Alicia, (son-in-law Matthew, grandson Lucas) of Post Falls ID, son Philip (daughter-in-law Christine, granddaughters Cameron, Vivian, Cecilia & grandson Philip), of Newtown, CT, son Steven (daughter-in-law Samantha, granddaughter Scarlett & grandson Jonas) of Southbury, CT and brother Peter (wife Ann) of Wescosville, PA and numerous nieces and nephews. A formal remembrance ceremony will be scheduled once social distancing protocols allow. As you always told us, "You're a Great American"

Philip T. Tisi, 72, formerly of Sloatsburg, NY passed away peacefully at his home in Tuxedo, NY on Tuesday, April 7, due to complications stemming from coronavirus. He was born in Dobbs Ferry, NY to the late Carmen and Mary Maiolo Tisi. He... View Obituary & Service Information

The family of Philip T Tisi created this Life Tributes page to make it easy to share your memories.

Send flowers to the Tisi family.