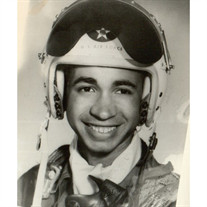 Peter Galindez May 25, 1934 - November 12, 2019 Peter was born May 25, 1934 to a young mother, Olga Williams, and father, Pedro Galindez, in Jamaica, N.Y. He was known as Johnny on the Williams side of the family, a nod to his baptismal name. Early life was difficult, so he frequently traveled to his Aunt Ada and Uncle Faustin in Harlem. This was usually done on his homemade bike, which led to his lifelong love of cycling. Johnny delivered telegrams during World War II for the War Department. He delivered draft notices and messages of sadness and sorrow. He found solace in music and sang in a "doo-wop" group whose highlight was an appearance at the Apollo Theater on Amateur Night. He also built homemade stereos and speakers. He enlisted in the Air Force when he was 18. After four years he left active duty and attended Howard University where he studied Botany. While at Howard he met the love of his life and fellow student, Mildred Consuelo Alexander. They were married on August 17, 1959 in Jamaica, N.Y. Their oldest daughter, Alexandria Mae, was born just prior to his graduation in May, 1962. In 1962 he taught 8th grade science at the Yeshiva of Spring Valley, N.Y. In 1963 Peter rejoined the Air Force. During that tour he was stationed with NATO in Europe. His twin daughters, Mary and Aurora, were born in England, and his son, Peter Jr. was born in France. In 1968 he entered the Air Force Reserves and returned to his teaching career. It was then he and Mildred settled down in Hillburn, N.Y. In 1969 he became a science teacher at Suffern High School. He was very passionate about his students and their learning. His hallmark was helping kids get excited about science. In fact, he was so successful many of his student kept in contact with him even after graduating from high school. He blended his love for the military and education by becoming a liaison officer for the Air Force Academy. In 1989 Peter retired from teaching and pursued his dream of seeing the world. In 1991 he retired from the Air Force Reserves. In between traveling he embraced his hobbies which included pottery, mounting and framing his photos, which he displayed at various exhibits around Rockland County. Throughout this time he and Mildred also traveled to see their children and grandchildren. As Mildred's health declined, he loving cared for her during her battle with cancer and dementia. After Mildred's passing Peter faced his own battles with Parkinson's disease. He lived alone for a couple of years and then moved in with his daughter Mae. In 2011 he joined his comrades in arms at the New York State Veterans Home in Montrose, N.Y. Peter is survived by his Aunt Betty, three of his children, Alexandria Mae, Mary, and Peter Jr. He has eight grandchildren, and four great grandchildren. He was preceded in death by his wife Mildred and their daughter, Aurora.

The family of Peter Galindez created this Life Tributes page to make it easy to share your memories.

Send flowers to the Galindez family.