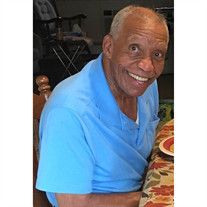 Paul W. Ruffin, Sr. of Suffern, NY, died Friday, December 7, at the Emerson Health and Rehabilitation Center of Emerson, NJ. He was 88 years old. Born in 1930 and raised in Pittsburgh, PA, he was the youngest of seven children of Ella (West) and David Ruffin. All of his siblings pre-deceased him. He was a resident of Rockland County for 51 years. Mr. Ruffin enlisted in the Army Air Force in 1947 and proudly served for 20 years on bases in the U.S. and abroad. In addition to being a veteran of the war in Vietnam, he served in Guam, Japan, and the Philippines. He met and married his wife, Leona Mae (Jackson) while posted at Stewart Air Force Base. They were married for 60 years, until Leona passed away in 2012. Retiring as a non commissioned officer from the Air Force in 1967, and he and the family settled in Spring Valley. Mr. Ruffin was employed by the Hughes Aircraft Company as a quality source engineer responsible for the tri-state area. He retired from that position in the mid 1990???s. A lifelong supporter of the Pittsburg Steelers and Spring Valley High School football he also enjoyed bowling and golf. He is survived by 2 daughters, Valerie Lynne Mathews, Lorna Jean Conley, one son, Paul W. Ruffin Jr. (Jolanta), and a daughter-in-law, Cheryl Ruffin of San Jose, CA. He was predeceased by a son, Bruce Travis Ruffin. He is also survived by his devoted companion and friend, Marion Schwartz. He also leaves behind 9 grandchildren and 6 great-grandchildren, and a number of loving nieces and nephews. Viewing will be from 5-8pm on Tuesday, December 11, 2018 and a funeral service will be held at the Suffern United Methodist Church the following day at 11am Wednesday, December 12. The family requests that in lieu of flowers donations be made to the Alzheimer???s Association. Interment will take place at a later date at the Frederick W. Loescher Veterans Cemetery in New Hempstead. Arrangements are by the Scarr Funeral Home in Suffern, NY.

Paul W. Ruffin, Sr. of Suffern, NY, died Friday, December 7, at the Emerson Health and Rehabilitation Center of Emerson, NJ. He was 88 years old. Born in 1930 and raised in Pittsburgh, PA, he was the youngest of seven children of Ella (West)... View Obituary & Service Information

The family of Paul Ruffin created this Life Tributes page to make it easy to share your memories.

Send flowers to the Ruffin family.