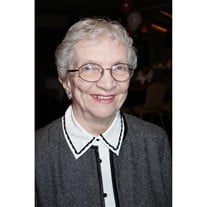 Mrs. Miriam "Mim" Leonard Byrnes, born on Nov. 9, 1934, in Pawtucket, Rhode Island, passed away on Jan. 19, surrounded by family in a beautiful hospice setting in New City, New York, after an extended battle with Alzheimer's disease. She was 84 years old. From the time she was very young, Mim wanted only to be a nurse and to have a family. She graduated from St. Vincent's School of Nursing and went to work at Good Samaritan Hospital in Suffern in 1957. Later in life, she earned a psychology degree from St. Thomas Aquinas College, which she used while working with challenged youth at Bergen Pines in Paramus. Mim married the late Richard Byrnes, Sr., in 1957. She is survived by her three sons and their wives: Richard and his wife, Maura, Michael and his wife, Eileen, and Peter and his wife, Damaris. She is also survived by sisters Elaine and Madeline, by Madeline's husband Ralph, and by many nieces and nephews. Once her children were grown, Mim enjoyed extensive travel with the Suffern Senior Citizens. The real joy of her "second half" of life was her nine grandchildren: Michael, Caroline (and her husband, John), Emma, Kathryn, Marta, Emily, Natalie, Daniel and Amanda; and her three great-grandchildren, Jack, Raegan and Layla. All of them enjoyed their visits to her home, where they knew that toys, games, baking and maybe a sleepover were provided with their Nana's special love for them. In lieu of flowers, the family requests donations in Miriam's name to Fisher Center for Alzheimer's Research Foundation or any other Alzheimer's-related charity. Visitation is from 4-8pm Tuesday, January 22 at Scarr Funeral Home, 160 Orange Avenue, Suffern NY (845-357-1137). Mass of Christian Burial is on Wednesday at 10AM, at Sacred Heart Church in Suffern, which Mim attended faithfully for over 60 years

Mrs. Miriam "Mim" Leonard Byrnes, born on Nov. 9, 1934, in Pawtucket, Rhode Island, passed away on Jan. 19, surrounded by family in a beautiful hospice setting in New City, New York, after an extended battle with Alzheimer's disease. She was... View Obituary & Service Information

The family of Miriam L. Byrnes created this Life Tributes page to make it easy to share your memories.

Send flowers to the Byrnes family.