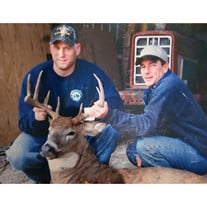 Michael Marusich, a lifelong resident of Tuxedo passed away on Saturday, October 12th at the age of 55. Born February 3, 1964 to John and Veronica (Dowd) Marusich in Tuxedo. Michael was married for 12 years to Kathleen (Brooks) Marusich and had one daughter, Julia. Michael was employed by the Town of Tuxedo Highway Department. He was employed there for over 30 years. Michael was also a volunteer firefighter for the Tuxedo Fire Department. Michael was also an avid sportsman. He traveled far and away to enjoy these activities. He traveled 3 times to Alaska to fish for salmon. He hunted in Pennsylvania, and Illinois to find that elusive buck. Michael enjoyed hunting with Ricky Marsh and his brother-in-law Vincent. Michael is survived by his wife Kathleen and his daughter Julia of Tuxedo. He is also survived by 3 sisters, Bernice (Tom) Eichengreen of Corning, NY, JoAnn Marusich of Terrebonne, OR, Kathleen Marusich of Waconda IL, Steven (Sherri) Marusich of Navarre, FL, and Robert (Charlene) Marusich of Norfolk, VA. He is predeceased by his brother John Scank. Michael is further survived by 2 brother-in-laws and 5 sister-in-laws. Vincent (MaryBeth) Brooks of Stony Point, NY, William (Erica) Brooks of Stony Point, NY, Karen (Fred) Hoag of Hewitt, NJ, Carol (Bobby) Scandell of Fort Montgomery, NY, Jennifer (Harry) Conklin of Parksville NY, Josephine (Ryan) Mulvey of Lockport, NY and Amanda (Stalin) Fulgencio of Thiells, NY. Michael leaves behind numerous nieces and nephews. Michael had many numerous friends. Some of them include Fred Jones, Tommy Iazzetti, and Ricky Marsh. Family and friends can pay their respects on Thursday October 17th between 2-4 and 7-9 PM at Scarr Funeral Home 160 Orange Avenue, Suffern, NY. Services for Michael will be at 11 AM Friday, October 18th at Scarr Funeral Home. Interment will follow at St. Anatasia Cemetery, Rt. 17M Harriman, NY. The family asks in lieu of flowers, donations can be made in his name to Kaplan Family Hospice Residence, 1 Sunrise Lane, Newburgh, NY 12550.

Michael Marusich, a lifelong resident of Tuxedo passed away on Saturday, October 12th at the age of 55. Born February 3, 1964 to John and Veronica (Dowd) Marusich in Tuxedo. Michael was married for 12 years to Kathleen (Brooks) Marusich and... View Obituary & Service Information

The family of Michael Marusich created this Life Tributes page to make it easy to share your memories.

Michael Marusich, a lifelong resident of Tuxedo passed away on...

Send flowers to the Marusich family.