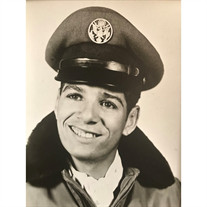 Meryl 'Winky' Van Dunk Sr., 86, passed on September 23, 2019. Born April 6, 1933 to Mary Francis and Harold Tracy Van Dunk in the village he would call home for the majority of his life, Hillburn, New York. Winky proudly raised five children and a granddaughter. He also served in the United States Air Force during the Korean War, stationed in Mississippi. Upon his return home he met, courted, and married the love of his life, Janet, on the fourth of July 1955 and started a family. Winky was well known in his community as a man who made everyone feel like family. Always willing to lend a hand, an ear, or a story, he was known to be a good man by many. An active man in his younger years, he loved fishing but didn't eat fish, loved gardening yet was not a huge lover of vegetables, but the fruits of his favorite activities were made even more special to him as they were enjoyed by his family and friends. Being larger than life, to try and sum up his importance in a few paragraphs is difficult even in the consideration that he himself was often succinct and to the point in his words and actions. He is survived by his devoted and beloved wife Janet Lorraine, daughter Cheryl Ann Rooney and husband John, son Meryl Jr. and wife Cammille, son Jeffrey and wife Renee, daughter Deidre, son Todd and wife Pam, and daughter Iona 'Autumn' Lorraine. Granddaughters Carlin LaReye, Amber, Caitlyn, and Samantha L., and grandsons Jeffrey Justin, Bryan Kieth, and John Francis III, Henry and Charlie. Also survived by his sister Lorna Z. Oneal of Molokai Hawaii, and 22 grand and great grand children who will all hold his memory in the deepest of love and highest of esteem. He will be met in spirit by countless friends and family, including his sisters Collette Walker, Colleen Cross, and Inez Van Dunk, his brothers Harold Tracy Jr, Maclendon and Anthony and his grandson Merrill Cody Van Dunk all equally adored and loved. At the request of family no public services will be held as they ask for quiet contemplation in respect of this great loss. Thank you all very much.

The family of Meryl VanDunk created this Life Tributes page to make it easy to share your memories.

Send flowers to the VanDunk family.