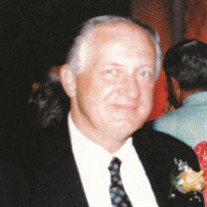 John Robert "Bob" Henebry died on December 14, 2021 in Suffern, NY at age 94. He was born to Leo and Ellen (Brennan) Henebry in Kearney, NJ on July 30, 1927 and raised in Queens, NY. Bob was a graduate of Queens College and New York University where he earned degrees in economics and educational administration. He served for many years as principal and assistant superintendent in the Pearl River School District and the Suffern Central School District. In retirement he continued teaching at Sacred Heart School and as a substitute teacher at Suffern High School. During World War II Bob proudly served in the U.S. Navy. He enjoyed talking about his service years and listening to the experiences of other veterans. He had a lifelong interest in history, especially American history. It was not unusual for him to read 2 or 3 books a week. He made almost daily visits to the Suffern Free Library until the week of his death. Bob was a faithful and enthusiastic member of the Montebello Senior Club where he had many friends. He was also a member of the Ramapo Senior Center where he enjoyed playing pool regularly in recent years. Bob was predeceased by Connie, his wife of 55 years, (2012), and his brother Bill. He is survived by his devoted son, Bob, and daughter in law Dorene, his beloved grandsons, Jared and Liam, loving friend, Mary Anne Nugent, numerous cousins, nieces and nephews throughout the country and many Suffern friends. We release Bob to the Universe with affection and appreciation for his well-lived life. A wake will be held at Edwards Funeral Chapel, Suffern on Monday, December 20th from 1-5PM, where a prayer service will take place at 3PM. Burial will be held at a later date at the F.W. Loescher Veterans Cemetery. If desired, you may make a donation in Bob's name to Sacred Heart Church, 129 Lafayette Ave. Suffern, NY 10901.

John Robert "Bob" Henebry died on December 14, 2021 in Suffern, NY at age 94. He was born to Leo and Ellen (Brennan) Henebry in Kearney, NJ on July 30, 1927 and raised in Queens, NY. Bob was a graduate of Queens College and New York University... View Obituary & Service Information

The family of John R. Henebry created this Life Tributes page to make it easy to share your memories.

Send flowers to the Henebry family.