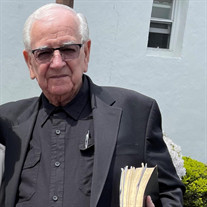 Dr. Jack Donald (J.D.) Walker, 82, died December 20th, 2021, with his family by his side, praising God on his way home at the Valley Hospital in Ridgewood, NJ. He was born January 29th, 1939 in Coalgood, KY to Leander Lee and Pauline Dakota Walker. His father was a coalminer in Kentucky and his mother a homemaker. At 16 years old, Dr. Walker entered the Air Force where he was stationed in Lackland, TX and travelled as far as Morocco. He was an electrician on B-52 bombers. In 1961, he was honorably discharged from military service and entered his calling to ministry. He graduated from F.G.B.I. and later went on to finish his doctorate. He served as a Pastor and Evangelist for over 50 years at The City of Refuge Church in Mahwah, NJ. He travelled to Haiti and Africa numerous times to do missionary work and preached in New York City at evangelistic meetings. In addition, he preached on t.v. and radio. Dr. Walker was the kindest soul and had the most loving heart towards anyone. He never met a stranger, and just wanted everyone to know who Jesus was and to be ready for the Lord’s return. He gave more than he ever received, but he wouldn’t have had it any other way. He had a true servant’s heart. Dr. J.D. Walker is survived by his wife, Arlene Walker; his daughter, Lora Franklin; his son-in-law, Curtis Franklin; his granddaughters, Jacquelyn Parris and her spouse Jamel Parris, and Cayla Franklin; his grandson, Michael Tazelaar; and his great grandson Elijah Parris; his brothers, Jim Walker and Eddie Walker; and their spouses. He was preceded in death by his father, Leander Lee Walker; his mother, Pauline Dakota Goode; his brothers; Elton Walker, Leon Walker, Lillard Walker, Norman Walker, Abe Walker, Bevy Walker, Benny Walker; his sister, Peggy Penney. His legacy remains in the hearts of every person he ministered to around the world through Highway to Heaven Ministries.

Dr. Jack Donald (J.D.) Walker, 82, died December 20th, 2021, with his family by his side, praising God on his way home at the Valley Hospital in Ridgewood, NJ. He was born January 29th, 1939 in Coalgood, KY to Leander Lee and Pauline Dakota... View Obituary & Service Information

The family of Dr. J.D. Walker created this Life Tributes page to make it easy to share your memories.

Send flowers to the Walker family.