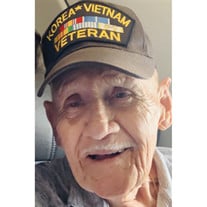 Gary V. Brown, 85, of Tuxedo, NY, formerly of Elgin, SC, died Monday, October 28, 2019. Born on May 23, 1934, he was the son of Dorothy B. Hammerschmidt and Vern Brown. Gary enlisted and served in the Marines from 1952 - 1955 was honorably discharged and then re-enlisted in the Army. He retired in March of 1973 as a Sergeant First Class after serving in Vietnam and Korea. In June of 1962, he took and received his GED. He received several medals including: Army Commendation Medal, Good Conduct Medal 5th Award, Good Conduct Award - 2d Award, Vietnam Service Medal and National Defense Service Medal . Gary met and married Eleonore Pfeiler Brown while stationed in Germany and remained in love so much that they were married again in the United States after they relocated their family in 1961. Following his family's move he lived in Georgia and later lived in Kentucky, Florida, South Carolina, Alaska, New York and Massachusetts. After serving our country, he held several jobs and volunteered, but enjoyed hunting, fishing and spending time with his late wife. Survivors include his children, Pete Brown (Jean), Peggy Brown, Curtis Brown (Kevin) and Sherry Brown; daughters-in-law, Shay Brown and Rose Brown; his brother, David, 10 grandchildren; and 21 great-grandchildren who lovingly called him "Opa"; as well as numerous extended family members. In addition to his parents, he is preceded in death by his wife, who he called "Liz", Eleonore Pfeiler Brown; sons, Charlie and Gary Brown; two grandsons, Joe Almeida and Benjamin Brown, his brother Chris who died in Vietnam and sister Marianne. The graveside service with Military honors will be held for Mr. Brown at 12:00 PM on Saturday, November 9, 2019, at Orange County Veterans Cemetery in Goshen, NY. Memorials in Gary's honor may be made to the Wounded Warrior Project, 7020 AC Skinner Parkway, Suite 100, Jacksonville, FL 32256. Memories and condolences may be shared at: Scarr Funeral Home; http://www.scarrfuneralhome.net/

The family of Gary V Brown created this Life Tributes page to make it easy to share your memories.

Send flowers to the Brown family.