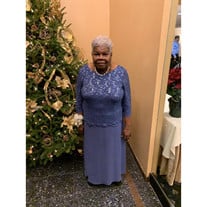 Floriane was born on December 15th, 1938 to her late mother Feicine Dory and late father Falante Hyacinthe in Grand Vincent, Haiti. She passed away peacefully on Thursday April 16th, 2020 in Nyack, New York. She worked hard as a single mother to support all her four children. She did not have much schooling through traditional education herself but putting her children through school was her highest priority. She was a devoted catholic and a woman of prayer who always had her rosary beads on her and would recite the prayers of Virgin Mary. Her love, kindness and selfless acts were felt by anybody who crossed her path. She did not have much, but whatever she had she would want to share with anybody in need. Floriane migrated to the United States in pursuit of a better life on April 18th, 1989. She left behind her three sons and her niece Sejinale Mezier, whom she raised as her own. Floriane worked for 11 years at community health agency as a home health aide. She was a devoted parishioner of St. Joseph's Church in Spring Valley, New York. She was a member of "Groupe de la Louange". She was involved in many more activities in the church, including visiting sick people in the hospital, praying for them, and bringing them holy communion. She was deeply loved by her sisters in the church. They mentioned that she was a "Poto Mitan" for the church and will be greatly missed. Floriane loved her family unconditionally and wanted to be a motherly figure for anybody she knew, young or old. She always had a word of encouragement to share with people, and today we celebrate her life, not her death. She is survived by her four children: Franckel Juste, Maryse Sanon (born Juste), Fred Juste, & Hansy Juste. Also survived by her son in law, Jady Sanon, and her daughters in law, Gina Juste, & Noeda Juste. She was loved and cherished by her 11 grandchildren, Stephanie Marly Cantave, Johnathan Anthony Juste, Stanley Francois, Wesley Emmanuel Sanon, Gorvern Juste, Marie Brisa Juste, Rodcar Juste, Prince Treasure Juste, Hans Juste, Noah Juste, & Nadya Juste. In addition to her immediate family, she is also survived by her siblings, Marie Salomon, Yvanah Mezier, Ena Mezier, Manze Mezier, Emilda Mezier, & Louis L-Hhomme Yhacinth, and many cousins, nieces, and nephews. She was truly loved and will be greatly missed by all her family and her friends. Due to the global pandemic we could not have a proper Catholic funeral service. We will schedule a Catholic memorial mass and celebration of life service at a later date. This is an unfortunate situation, but we are praying for things to turn around soon. Be safe everyone.

The family of Floriane Dory created this Life Tributes page to make it easy to share your memories.

Floriane was born on December 15th, 1938 to her late mother Feicine...

Send flowers to the Dory family.