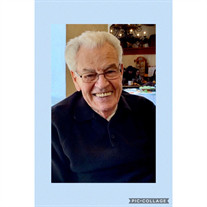 Edward Thomas Daly, 90, formerly of Suffern, NY, entered into eternal rest on Friday, April 24, 2020, at The Valley Hospital, Ridgewood, NJ, after a brief illness. Edward was born on January 6, 1930, (The Feast of the Epiphany) in Manhattan, NY, to the late Martin and Anna Daly (nee Clark) and the youngest of five children. Edward was predeceased by his loving wife, Anna Calbi Daly in 2003. Edward was raised in Manhattan and attended two high schools, Cardinal Hayes and Gompers High School in the Bronx. Edward proudly served in the United States Air Force from 1950 - 1954. He served in the Korean War as a Staff Sergeant, stationed in Weisboden, Germany. Edward began his career in banking at Morgan Guaranty Trust in Manhattan, NY., where he met the love of his life, Anna Calbi Daly. Edward married his soulmate on October 25, 1958 and together, they began a beautiful life in the Bronx. They were blessed with two children, Christopher and Lisa, and moved to Suffern, NY. Edward also worked for The Industrial Bank of Japan and Saudi International Bank, before his retirement in 1993. After his retirement, Edward continued to do what he did best, put his family first. He was a devoted son, husband, father, son-in-law, brother, grandfather, uncle and friend. When Edward loved, he loved with all of his heart and would do anything for anyone. He was the most selfless, generous and loving man who had a heart of gold. He was so trusting, only seeing the good in people. Edward had an incredible ability to light up the room with his beautiful smile. Beloved by all, Edward's kind and loving ways will forever be etched in our hearts. He has left his family heartbroken, yet there is comfort knowing that he is now reunited with his loving wife. Edward will be greatly missed by his daughter Lisa Daly Henriquez and her husband, Joel Henriquez of Monroe, NY. and his grandchildren Kevin, Michael and Cara Ambrose, Gianna Henriquez, Christopher and Michael Daly. Edward is also survived by many nieces, nephews and dear friends. Besides his parents and his wife, Edward was predeceased by all of his siblings, Martin, Helen, Catherine and Joseph, his son Christopher and his mother and father-in-law, Rose and Frank Calbi. Donations can be made in his memory to the Alzheimer's Association, (http://www.alz.org) Due to the COVID-19 restrictions, services are private. Scarr Funeral Home Suffern, NY 10901

Edward Thomas Daly, 90, formerly of Suffern, NY, entered into eternal rest on Friday, April 24, 2020, at The Valley Hospital, Ridgewood, NJ, after a brief illness. Edward was born on January 6, 1930, (The Feast of the Epiphany) in Manhattan,... View Obituary & Service Information

The family of Edward Daly created this Life Tributes page to make it easy to share your memories.

Send flowers to the Daly family.