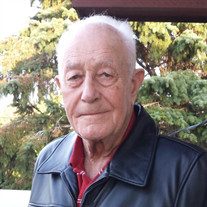 Detlev Wilhelm Zimmermann, (95), of Montauk, NY, died peacefully on March 13, 2022. Detlev was born in Krolow, Pomerania, Germany on June 21, 1926 and was the son of Otto Friedrich Zimmermann and Charlotte Elisabeth Margarete Zimmermann (b. Pagel). Detlev was predeceased by his loving wife Ruth Zimmermann, his daughter Helga Gray, his sister Gisela Hager and his grandson Kevin Zimmermann. He is survived by his son and daughter in law, Roland and Laura Zimmermann and his daughter and son in law Ursula and Van Dang, his son-in law Joseph Gray, his 6 grandchildren, Jason (and wife Jamie) Zimmermann, Tristan and Alex Gray and Emerson, Aaron and Beatrice Dang and great-grand daughter Phoenix Zimmermann. Detlev lived a full and exciting life. At the age of 17 he entered the Naval Academy near Lake Constance, Germany for two years. He went on to serve aboard two submarines during WWII as Lieutenant and Second Lieutenant respectively. On his very first mission the U-boat he was on was destroyed in the harbor by the British. He was one of 4 survivors, out of a crew of more than 50. Later, he earned the Iron Cross on a mission to the Port of Murmansk in Russia where his submarine was entangled in anti submarine netting and he was part of the team that freed the sub. After the war ended he spent two years as a POW in France. When he was finally released he returned to Germany and rescued his mother from communist East Germany and brought her to safety. In 1951 he immigrated to the United States and was joined a year later by Ruth. Detlev worked in the trucking industry for 30 years and was an owner-operator of an auto transport carrier. He worked for several companies including NuCar Carriers out of Newark, NJ. He had many stories of harrowing adventures and mishaps in this trucking career as well. Detlev and Ruth bought a home in Ramsey, NJ and raised their 3 children there. In 1980 he built his dream retirement home in Montauk, NY and gave up the trucking business. In his retirement he volunteered with the Coast Guard Auxiliary for another 30 years where he also held the rank of Lieutenant. He and Ruth were snow birds and spent winters in Hernando, FL. But Detlev loved Montauk and the ocean and always said it reminded him of his childhood near the Baltic Sea. A gathering of family and friends will be held at Edwards Funeral Chapel in Suffern, NY, Saturday, March 19, 2022, 12:00 - 2:00 pm and a Memorial Service will be held this fall (time and place to be announced) in Montauk, NY.

The family of Detlev W. Zimmermann created this Life Tributes page to make it easy to share your memories.

Send flowers to the Zimmermann family.