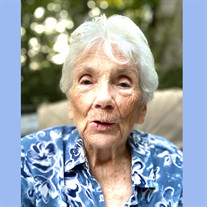 Barbara Elizabeth Ellsworth died at home on September 6, 2021. Barbara was one of thirteen children born to Delia and Jack Squires on May 24, 1931. Born and raised in Bayonne, New Jersey, Barbara was a graduate of the Holy Family Academy where she excelled in sports, but it was her angelic that voice gained her many awards and an offer to tour professionally. Instead of hitting the road with Mitch Miller, and without regret, she decided on a career raising her family with her husband Robert, whom she met while they both worked at Royal Globe Insurance in Manhattan. After their marriage they lived in the Bronx for a few years where they had their first two children, Robert and Richard. A few years later in 1963 Bob and Barbara moved to the “country” settling in Suffern, New York, where they had their two girls, first Ann and then Mary. While moving to the country had its challenges for a girl from Bayonne, Barbara faced them head on. She learned to love the family camping trips and even accepted the gifts of field mice from the family cat Beauregard. Learning to drive when she was almost 40 gave Barbara access to so many good things in the community including the ability to earn an Associate’s Degree from Rockland Community College, and to be the loving volunteer for her kids and eventually her grandkids. Barbara’s beautiful voice did not go to waste as she was known to sing at every opportunity (particularly Danny Boy and Ave Maria) and loved belting out the hymns from the choir loft at Sacred Heart Church, where she sang for almost 60 years. Her volunteer work within the Church and community was continuous and she was proud to have taught religious education to hundreds of children for over thirty years. Her love of God and of her Church was known by all, and she exhibited that love to everyone she met. All were better off after an encounter with Barbara. Barbara is predeceased by her husband, Robert in 2015, and eleven of her siblings. She is survived by her son Robert, her son Richard and his wife Kelly, her daughter Ann and her partner Debbie and her daughter Mary, and her grandchildren Kathleen, Richard, Elizabeth and Jess. She is also survived by her brother Francis as well as countless nieces and nephews spread throughout the land. Barbara’s love for others truly paid off as her life neared its end, as that love was given back to her by her family and by countless friends and caregivers. There are no words to express the gratitude we have for all of you. In Lieu of flowers contributions may be made to Sacred Heart Church, where Barbara enjoyed so much of her time, would be appreciated.

Barbara Elizabeth Ellsworth died at home on September 6, 2021. Barbara was one of thirteen children born to Delia and Jack Squires on May 24, 1931. Born and raised in Bayonne, New Jersey, Barbara was a graduate of the Holy Family Academy where... View Obituary & Service Information

The family of Barbara E. Ellsworth created this Life Tributes page to make it easy to share your memories.

Send flowers to the Ellsworth family.