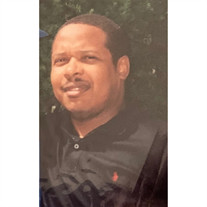 Austin Agustus Rodulfo was born on July 10th, 1957 in Harlem , New York to the late Percival and Evelyn Rodulfo.He was a reserved man with a light heart and a relaxed personality. He had four older siblings Elizabeth Spears, Donna Gunter, and Selvin Rodulfo. A few years after graduating high school , he married Valerie Merchant in 1977 and soon had his first son Austin Rodulfo Jr. In his early twenties he went on to serve this country in the United States Airforce from 1977 and was honorably discharged in 1980 . With a passion to protect and serve , in 1985 he became a correctional officer with the New York City Department of Corrections .It was during his time as a correctional officer that he divorced and then got remarried to Monica McConner in 1992 and later had his first daughter Krystal Rodulfo and gained a bonus daughter Ebennie Johannes. His children were his pride and joy . He was devoted to taking care of his family and loving them. He remained a long time resident of Orange County , NY where he later retired and spent time with his children and enjoyed his life. During that time he earned his Associates Degree in Paralegal Studies from Rockland County Community College. To broaden his learning he also went on to become a Certified Nursing Assistant. He had an interest in combining his knowledge of law with healthcare. He always had an ambitious spirit that was eager to learn more. He was a serious and disciplined man , but never missed an opportunity to laugh and enjoy himself. Besides spending time with family, he enjoyed long car rides with the sounds of smooth jazz. He also enjoyed fishing with his children , shopping, and spending quality time with his relatives. He was a regular member of the YMCA where he dedicated time to practice healthy living. Austin was a calm, playful , and noble man. On May 29, 2020 Austin entered eternal rest at Good Samaritan Hospital in Suffern , NY. He will be greatly missed by his friends , family, and all that knew him. His cheerful laughter and bright smile will be remembered forever. In our grief let us know that Austin is at peace and at rest. He will live on in our hearts.His legacy will continue on forever. Austin is survived by his three children : Austin Rodulfo Jr, Bronx ,NY; Krystal Rodulfo,NY & NC and Ebennie Johannes-Morris FL. His siblings Elizabeth Spears, Raeford,NC and Donna Gunter, Middletown, NY. His grandchild Alahnna Rodulfo , Bronx, NY. His former wives Valerie Merchant, NY and Monica McConner Rodulfo NC,. Along with a host of nieces, nephews, and relatives that made his days brighter. Austin was predeceased by his father Percival Rodulfo and mother Evelyn Rodulfo. His brother Selvin Rodulfo and his grandson Austin Rodulfo III. Foot Prints in the Sand by Mary Stevenson One night I dreamed I was walking along the beach with the Lord. Many scenes from my life flashed across the sky. In each scene I noticed footprints in the sand. Sometimes there were two sets of footprints, other times there were one set of footprints. This bothered me because I noticed that during the low periods of my life, when I was suffering from anguish, sorrow or defeat, I could see only one set of footprints. So I said to the Lord, "You promised me Lord, that if I followed you, you would walk with me always. But I have noticed that during the most trying periods of my life there have only been one set of footprints in the sand. Why, when I needed you most, you have not been there for me?" The Lord replied, "The times when you have seen only one set of footprints, is when I carried you." Mary Stevenson

Austin Agustus Rodulfo was born on July 10th, 1957 in Harlem , New York to the late Percival and Evelyn Rodulfo.He was a reserved man with a light heart and a relaxed personality. He had four older siblings Elizabeth Spears, Donna Gunter, and... View Obituary & Service Information

The family of Austin A Rodulfo created this Life Tributes page to make it easy to share your memories.

Send flowers to the Rodulfo family.