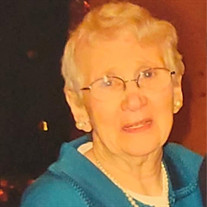 Anne Dami, of Sloatsburg, NY, went to be with the Lord on Monday, November 1st, 2021, All Saints’ Day. She was surrounded by the comforts of her own home and love of her family. Anne was born in New York City on September 15th, 1925, to John and Catherine Eberhart (nee Ziegler). Anne was one of five siblings, and the middle child. She went to Hunter College and earned her degree in Chemistry before marrying her childhood friend, Bill Dami, in 1949. Through the following decades, she wore many hats. Sister, aunt, cousin, wife, mother, mother-in-law, grandmother, girl scout leader, boy scout leader, chocolatier, godmother, and great-grandmother. She gave her all to every one of them. Anne was a devout Catholic, who found solace in the hard times, and joy in the good times, through her prayers. You could find her at Sunday mass every week or watching mass on TV when she could not attend. She loved to cook, and most especially bake. You could find her children and grandchildren sneaking the scraps from her pie crust after she baked them in the oven (with just the right amount of cinnamon on top). She was an avid crocheter, making blankets for every new addition to the family. She would sit on the couch for hours with her yarn bag at her feet, watching TV with Bill (Pop-Pop), just to get her new creation done in time. Anne touched the lives of so many throughout her 96 years. None more so than her family. She is survived by her children- Marianne (Carmine), Paul (Doreen), Lisa (Patrick), Mady, David (Susan), Suzanne (Andrew) and Timothy. Her 13 grandchildren- Erica (Bill), Jessica (Joe), Vanessa (Michael), Rachael (Michael), Billy (Lisa), Ashley (Tom), Stephen, Matthew, Mark, Anthony, Leigh-Anne (Eric), Philip and Thomas. And finally, her great-grandchildren- Alyse, Declan, Aidan, Dylan, Zack, Renae, Ruby, Billy, Mikey, Guiliana, Joey, Emma, Skylar, Saige, Sloane and little Calvin. She is also survived by her sister, Clare. Anne is predeceased by her husband Bill, her three brothers- Jack, Buddy and Richie, her parents, and her beloved son Christopher. In lieu of flowers, donations may be made to United Hospice, 11 Stokum Lane, New City, NY 10956 OR EWTN- 5817 Old Leeds Road, Birmingham, AL 35210.

Anne Dami, of Sloatsburg, NY, went to be with the Lord on Monday, November 1st, 2021, All Saints&#8217; Day. She was surrounded by the comforts of her own home and love of her family. Anne was born in New York City on September 15th, 1925, to... View Obituary & Service Information

The family of Anne Marie Dami created this Life Tributes page to make it easy to share your memories.

Anne Dami, of Sloatsburg, NY, went to be with the Lord on Monday,
November...

Send flowers to the Dami family.