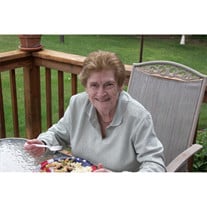 Agnes Scully Newell, Rockland County Banker dies at 92. Agnes "Red" Scully Tomporowski Newell passed away peacefully in her sleep on December 17, 2018 at Schervier Pavilion Nursing Center in Warwick, NY. Red was born in Suffern, NY the sixth of nine children of the late Edward J. and Charlotte (Knickerbocker) Scully. A 1944 graduate of the Suffern High School (SHS) business administration program, Red was a protégé of the program's legendary director, Louise "Honey" Ridley. She working her way up through the ranks of Suffern National Bank to executive-in-charge on the platform. In 1965 Red was asked to manage the first satellite branch bank in Tallman, NY which was acquired by the Bank of New York the following year. Commended by bank officials and staff in 1967 for her handling of an armed robbery, she was later promoted to bank headquarters in Suffern as senior administrator. Upon retirement in 1986, Red was immediately hired to manage the Suffern Savings and Loan Bank. She remained on the executive bank team, and was well known and respected in the industry. When Suffern Savings and Loan merged with Providence Savings and Loan in 1990, Red again retired concluding forty-six years in banking. She was predeceased by her first husband Theodore Tomporowski, a Mahwah, NJ business owner and developer, and by her second husband Edward "Bud" Newell, a Syracuse, NY, commercial realtor, and by her eight siblings: Edward, Robert, Henry, Charlotte Wassmer, Mary Lydon, Katherine Scully, Veronica Carden, John, and their spouses. Red leaves behind her son Theodore "Ted" (Anne Kuplinski) Tomporowski of Warwick, NY, granddaughter Kerry Tomporowski also of Warwick, NY, grandson Theodore Tomporowski (Victoria) and great grandson Theodore Tomporowski of Rochester, NY. She is survived also by 22 nephews and nieces and their families and by numerous relatives, friends and former colleagues. A vivacious, gregarious and caring woman, Red will be remembered by those she loved and those whose lives she touched. She was someone always on top of the latest news and gossip and unafraid to voice her opinion, a trait which earned her the nicknames "WJZ" and "Scoop." Red was a tennis enthusiast and a regular on the courts in youth, an avid bridge player, the SHS alumni treasurer for decades, a Florida Snow Bird after retirement and enthusiastic Facebook and E-mail user. She was active in both Ramapo and Suffern Senior groups as well as in Rockland County politics. This was especially so during her nephew, Bud Wassmer's, four successful bids as Mayor of Haverstraw, NY. With Red's passing, the Giants have lost a loyal fan, and her loved ones a faithful friend and confidant. A viewing will be held on Wednesday, December 19, 2018 at Scarr Funeral Home, 160 Orange Ave. Suffern, NY, 2:00-4:00 PM and 7:00-9:00 PM. An 11 AM Funeral Mass will be said, in her memory, on Thursday December 20, 2018 at Sacred Heart Church, Suffern, NY. Interment will follow at Brick Church Cemetery, New Hempstead, NY.

The family of Agnes Newell created this Life Tributes page to make it easy to share your memories.

Send flowers to the Newell family.